Dev Diary 4: Building the Arth Starport for Starflight: The Remaking of a Legend

Dev Diary 4: Building the Arth Starport for Starflight: The Remaking of a Legend

New dev diary incoming! This time Marvin begins the daunting task of creating the big Arth Starport and all its departments for his Starflight: The Remaking of a Legend project. Next article will cover the creation of the new Arth spaceship!

I spent quite a bit of time building the Arth Starport model in 3D Studio Max. It was a lot of fun. It was not hard to do at all – after all it’s just a bit of architecture and I’ve always been good at architectural modeling in Max. My primary goal was to make the station very recognizable. I eye-dropped the colors straight from the screen capture, and made the dimensions of the starport itself very similar. One thing I noticed about the starport in the original game, is that it was drawn quite incorrectly from a 3D perspective point of view. That made it a bit challenging to re-make, but I think I managed to do a decent job.

There are only two texture maps on the starport – the first one is the Arth logo which appears on one of the light gray outside panels, and the blue 6 pointed star that appears on the floor. I made both of these in Illustrator.

The starport in the original game 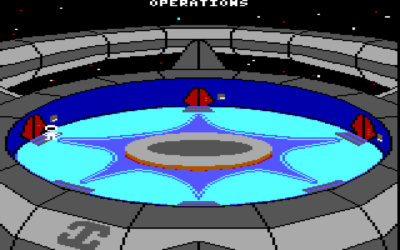 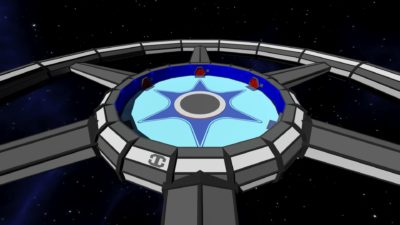 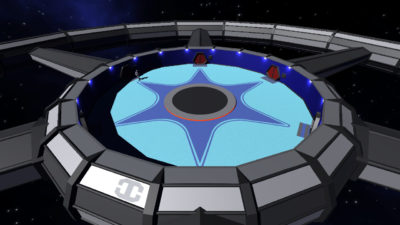 What I call “the astronaut” is the little guy in the original game that you make walk around the spaceport.

As mentioned in a previous post, I am pretty gosh darn good at architectural 3D modeling. However, my ability to model organic objects is really bad. So, when it comes time to do something about having a player model walk around the Arth Starport, I begged the Internet gods for a ready-made model that I could just drop into the game and use.
And the gods delivered.

On archive3d.net I discovered a model aptly named “Astronaut 3D Model” that is pretty decent, and already in the T-pose for rigging. I’m no expert at rigging character models, but it is something I know how to do. So, I imported the 3DS model into Max, fixed up the smoothing groups, rigged and skinned the model (badly), and exported it into the FBX format that Unity likes. Oh, and I also assigned some material IDs to certain parts of the suit so I could at least have different colors on the suit and not have it be all white.

While the animations generally work well, the run animation does has a hitch in it, most likely from my bad rigging job. If anybody would volunteer to give me a better model and / or animations I would be more than happy to accept.

There are six doors on the Arth Starport. They are Operations, Personnel, Crew Assignment, Bank, Ship Configuration, and Trade Depot.

I finished the Operations door. Within this panel, there are three distinct screens – the “welcome” screen, the notices screen, and the evaluations screen. I have not done the evaluations screen yet as that would require the player to recommend planets for colonization first. The notices screen is completely done – I have all the notices game data set up and it will show the appropriate notices based on the last notice read by the player and the current stardate.

I changed the controls slightly to be more modern when reading the notices.

The next door I worked on was the personnel door. The panel that comes up has the most complicated UI of all the doors at the starport. Here, you create and train crewmembers.

The original game had images for the 5 races you could choose from. These images are very blocky due to the 160 x 200 resolution the original game ran in, so what I did was bring them into Photoshop, enlarged them, and used a Gaussian blur filter to soften the edges. Then I brought them into Illustrator where I used its nice “Image Trace” tool to produce outlines for each one of the races. After some fiddling with the settings for that tool, I was able to get very good results! 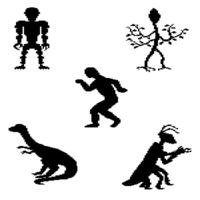 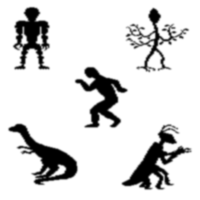 Now would be a good time to show you what I mean by making the game compatible with a wide range of aspect ratios. Below is a series of images showing the same screen in the remake, but at different aspect ratios. 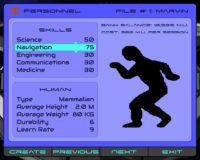 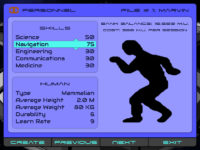 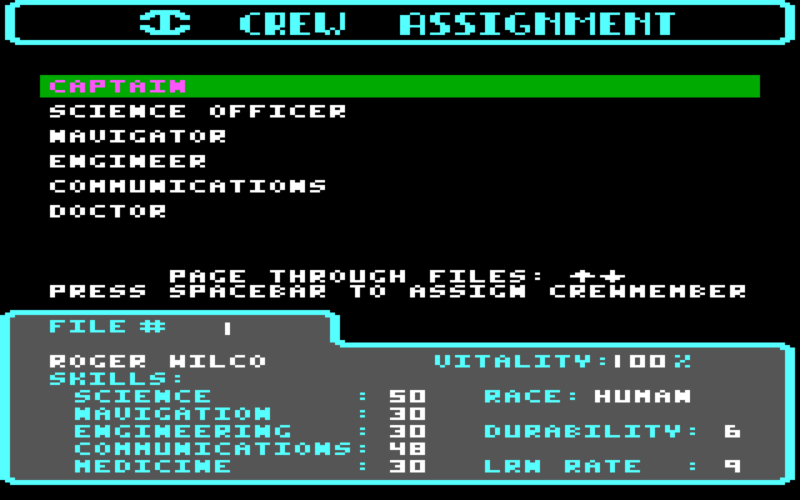 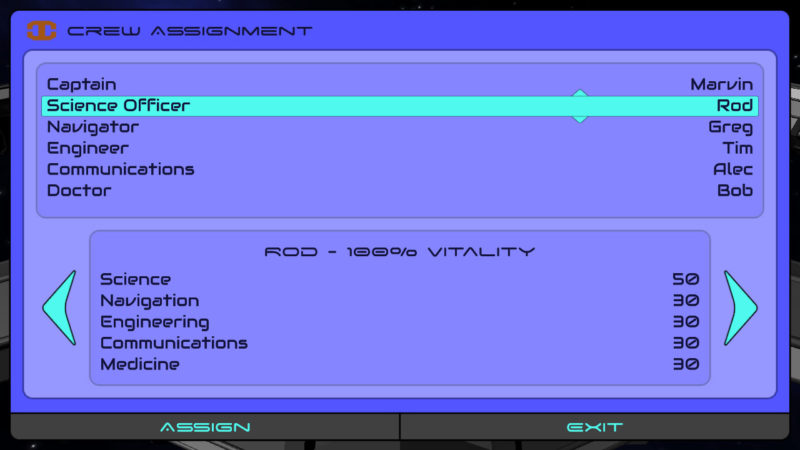 This door is also rather simple, but is more interesting in terms of having to fetch the player’s bank transaction logs and display them. All the player can do here is view the transactions and exit the door. If you are running the game in the Unity editor, you can have fun with editing the player’s data (more information here) and adding bogus log entries to see them show up here. Strip club, -8000 M.U.s? Sure! 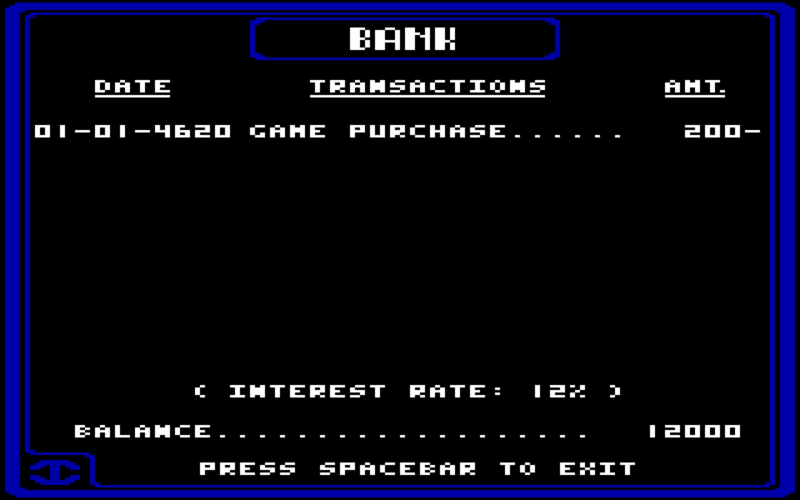 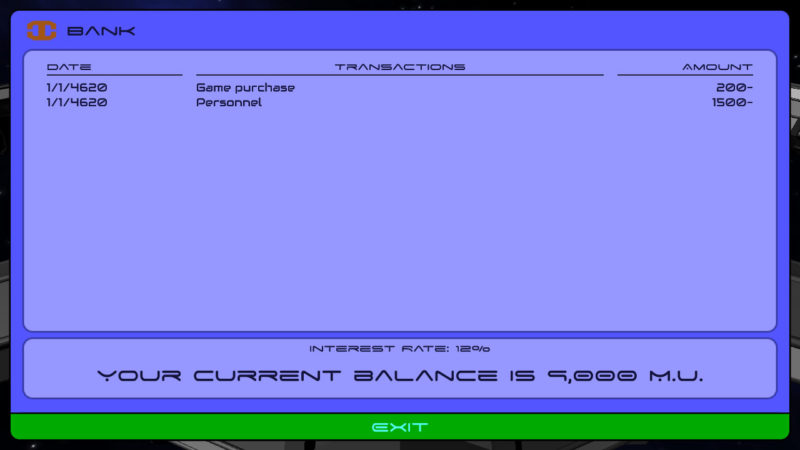