Again I'll call attention to this issue from the issue tracker.

I merged a duplicate thread referencing the same problem into this one.

by Bubbleheadjm
I have an ATI X1550 with the latest update drivers and have tried everthing mentioned in all the messages here. I have the same screens as Crane101 and Rolexman. But did you notice the planet in lower left corner is NOT sliced or split like the rest of the screen. Also when in orbit around a planet the Planet you are orditing is not split while the background is split into 12 parts.

by Steve
I received a Radeon HD 4870 1GB card today and was able to experience this error firsthand.

With the default Windows 7 located drivers: 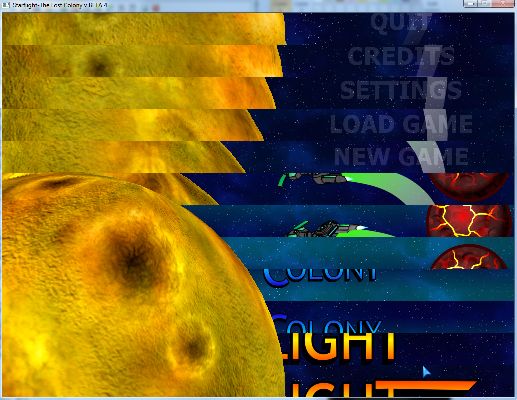 The drivers that Microsoft installed by default causing this problem: 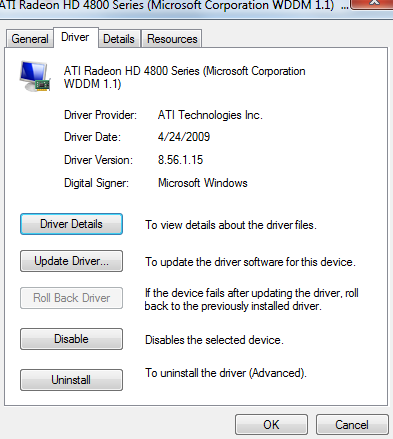 Since I'm running Windows 7 64-bit, after downloading the drivers from this website, my drivers are now listed as: 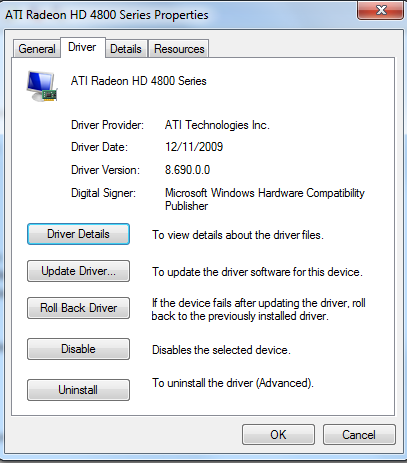 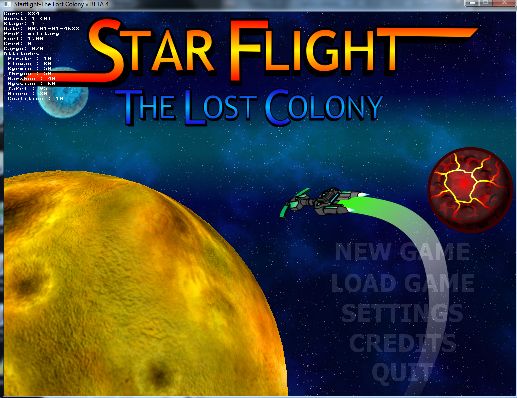 Note that I am getting a frame rate well over 100, so I can definitely declare this not VSync related. For anyone else experiencing this problem, could you let us know your ATI video driver date and version numbers? (device manager, details tab on the video adapter driver as seen above)

by Bubbleheadjm
I ran diagdx to get my system info for you but I could figure out how insert it here. and the driver stuff with the device manager I tried to print screen it to a file but nothing happens when i press the print screen button. I've never used that stuff and the help said all I had to do was press print screen. Sorry but I copy it down :
I have an ATI X1550 with 512 MB.
ATI Technologies Inc
Driver Date 4/27/2009
Driver Version8.593.100.0
I hope that helps. I don't understand this frame stuff. my refresh rate is 60 hz which is the highest setting I could find.
Thanks! Bubbleheadjm

by Steve
Again, note from my story above that I had trouble with graphics drivers dated April 2009 that were resolved by the latest drivers. According to AMD/ATI's website, the latest drivers for the X1550 is version 9.11 dated 11/17/2009 which is somewhat newer than what you are reporting. I would try to download the latest drivers first: http://support.amd.com/us/gpudownload/Pages/index.aspx

... and after you have installed either the complete software suite or just the WDM driver itself, go back to that driver information page and make sure that your driver version and date have changed. Unless you like to tweak your display settings and use the catalyst control center, I would suggest simply downloading the WDM driver.

If you ever want to go to the trouble of screen-capturing, press printscreen once (nothing noticeable will happen) and then load up paint or any other graphics program and do "edit/paste." Beyond that, cropping the resulting image and either uploading it as an attachment or using something like image shack is up to you.

by knhollenbeck
ok i have dowloded the latest ATI drivers, but my update is as follows
Driver date: 9/29/09
driver version: 8.593

by Steve
I believe that card is no longer supported actively with by AMD/ATI. Their website says that the last version of their catalyst drivers to support that card is 9.3, which at least is newer than 9.11.

I do not know if version 9.3 will solve your problem, but I would suggest googling for another source of that driver on another site. For example, if you use Windows XP:

Again since we do not have the money to pay a test lab, I have no idea if this particular driver will even install or work in your case. Try at your own risk.

by Rolexman
AMD/ATI is no longer providing support for drivers, unless it is critical, for cards UNDER the 2100 series.

I was able to update the date of the driver, but the version did not change.

This is the last version for said cards:

Can you, a software developer, encourage AMD/ATI to update for these cards?

If not, can you test and fix the software with this driver version.

I'm sure there are many users out there still using these cards.