by Blake00
If there's any oldschool Dos TBS Master of Magic fans like me lurking in the Starflight community I've recently made a video (as part of a up and coming Civ related games in HD series) touring what I feel is the best MoM fan project out there called Master of Magic – Implode’s Multiplayer Edition, a brilliant Open Source Java MoM engine rebuild that supports larger maps, up to 14 players (either Human or AI), and any modern resolution like HD 4K etc. The only thing it's missing is AI and some good bug fixing and polishing.

Although sadly it's creator Implode has gone AWOL and the project has been inactive for a while now..

But hopefully one day he'll return to it, or someone else will finish what he started due to it being opensource... 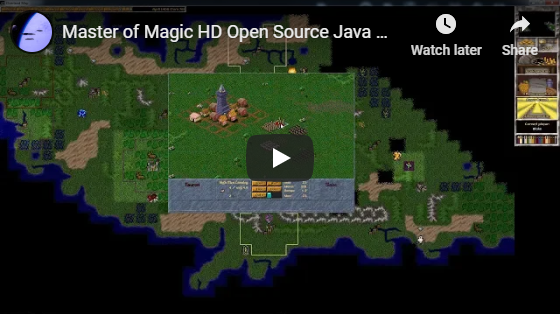 Looks like I don't have to worry about this unfinished fan remake anymore as it appears we've got an official Master of Magic sequel or Remake on way (courtesy of Slitherine who've bought the rights from Atari's IP dungeon and just made the announcement on their site)!!!

Guess this explains the mysterious Atari activities I noticed recently. Clearly they reacquired MoM so they could sell it to Slitherine for $$$.

I'm such a super fan of this 25 year old game that I run a MoM fans facebook group so as you can image I'm SUPER EXCITED about this news lol.

I can't can't believe that after all these years a real sequel just might be happening now. Sadly most of the old MoM forums are long dead so if there's any fans here who know of a good old MoM2 wishlist/feature request list out there please let me know and I'll go post it over on the Slitherine forums (which I've just signed up to).

They've probably barely started the project yet so now is the time to get fan feature requests and wish list items in front of their faces. If the remaining fan base doesn't speak up now then god knows what sort of game we'll end up with. So now is the time to act!